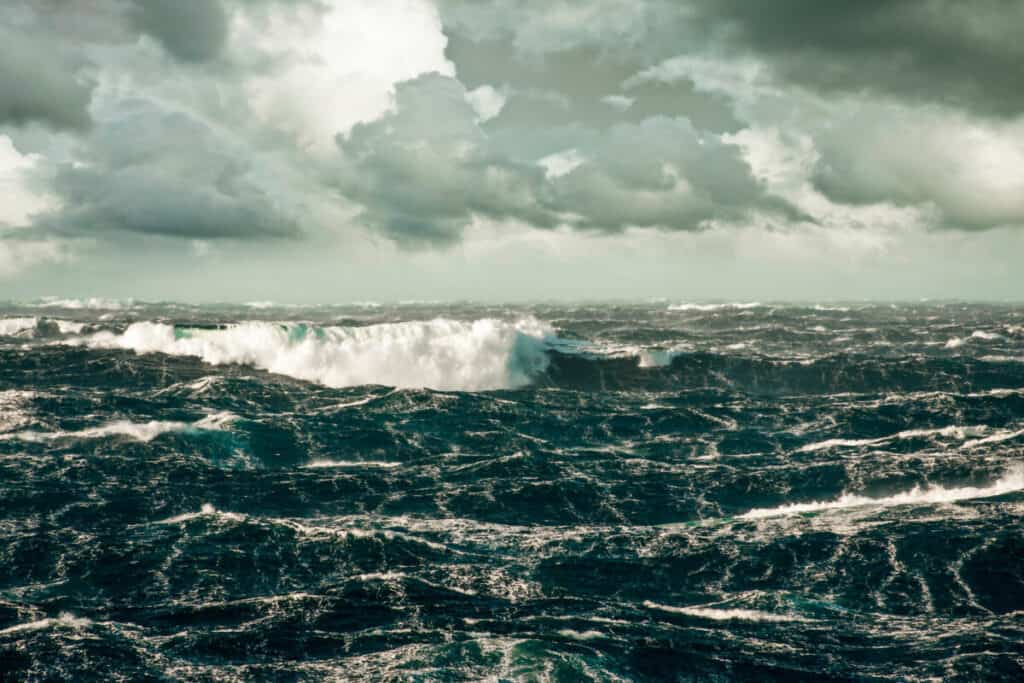 The ocean is a beautiful place, whether you’re right in the middle of it, relaxing on the beach, or wading in the shallows. However, as most experienced sailors and beach bums should know, the ocean can also be a fairly dangerous place, filled with mysterious sea creatures and prone to unpredictable weather spells. The only question is, which one is more dangerous, the Atlantic Ocean or the Pacific Ocean?

There are worse seas out there than the Atlantic and Pacific oceans, but the real question of the hour is whether or not it’s safe to cross one or either of these oceans on a catamaran. If you have ever wondered or are currently wondering whether you can safely cross the Atlantic or Pacific ocean on a catamaran, then keep reading.

The Atlantic Ocean: The Details

As mentioned before, the ocean in general (whether Pacific or Atlantic) has plenty of dangers and marvels to go around. However, many different types of boats have made it safely across with no fatalities and minimal difficulty. There is, of course, always some risk because of how unpredictable the ocean can be. But as long as you’re cautious, you shouldn’t let that stop you.

The world’s most dangerous seas include the South China Sea, British Isles, and a few others, but that doesn’t mean the Atlantic doesn’t have its risks.

Some of these dangers include rapid currents, dangerous tides, dangerous sea creatures, and hurricanes.

Plus, as mentioned before, there are quite a few coastal winds that greatly impact the weather there.

The Atlantic Ocean is over 41 million square miles in size. This makes it the largest ocean in the world, second only to the Pacific. Those waters are never still, either. Gyres and currents keep it ever moving and ever unsettled. Plus, with the temperatures constantly changing, hurricanes are somewhat prominent over the Atlantic.

However dangerous those things might sound, that hasn’t stopped anybody from adventuring across the ocean by any means. Catamaran sailing is pretty popular and despite their size, they are surprisingly safe. Cruising catamarans are probably the most popular design type for ocean crossing thanks to their multiplicity of safety features.

The Pacific Ocean: The Details

At 61 million square miles, the Pacific Ocean is not only the largest ocean on earth but it is also the deepest. This makes it a prime place for ships to sink and be swallowed by the waves. Although the Atlantic’s hurricanes are large and farther reaching, the hurricanes that rack the Pacific are even larger.

The Pacific is also home to plenty of sea creatures. While this may not directly affect boaters and sailors, there are plenty of venomous creatures (jellyfish especially) that can cause some pretty painful injuries if you were to come into contact with one. This, and those vicious hurricanes, are some of the primary reasons that the Pacific Ocean is so dangerous.

However, as with the Atlantic Ocean, you should not have to fear traveling/crossing it if you are cautious and know what you’re doing. Catamarans are a safe choice here as well since they are so well equipped for rough water and a lot of wind. If you take the time to prepare, you shouldn’t have anything to worry about.

You can read more about both oceans here.

There are risks to sailing both oceans, but there’s little you can do to predict exactly what might happen. However, if you are prepared to take the necessary steps to be ready for your sea voyage, then you’ll be in good shape for whatever happens. Here are a few important safety tips.

The biggest risks you’ll probably face are injury, bad weather, or issues with your boat. Weather is one of the dangers that you will have the least amount of control over, so be careful when navigating this particular area. Worst-case scenario, you’ll be facing some vicious hurricanes that could lay waste to your watercraft in one fell swoop. That being said, you’ll need to take extra precautions.

Make a plan and make sure you have accurate weather information before you even think about hitting the waves. If you go out into the unknown, you are going to put everybody on your boat at risk. You will need to pack accordingly and prepare the boat for whatever dangers may come your way.

It will also behoove you to prepare for any kind of injuries you or your crew might suffer while you’re out at sea. Remember that depending on where you are when accidents befall you, there is not going to be a hospital or instant care anywhere nearby that you can go to when something bad happens. That said, you need to prepare efficiently.

Before you leave the shore, make sure you know exactly the condition of your own health as well as the health of your companions. This means knowing about any preexisting conditions, prescriptions, or whatever else. Regardless of age or size or anything, it is always far better to be safe than sorry.

It will also be necessary to bring along a good first aid kit. And this doesn’t just mean band-aids and Neosporin, you’ll also need to bring bandages, painkillers, splints, and other more heavy-duty supplies. It may also be a good idea to receive training. It can’t ever hurt to have CPR training or stitch/staple expertise. You never know. It could save a life one day.

If and when you choose to hop out of the boat for a swim, you’ll need to be extra careful, especially if there are jellyfish or stingrays in the water. It may not be a bad idea to be scuba certified and knowing how to swim is a must. Plus, if you were to lose a crew member over the side of the boat (man over board), you’ll need to know how to safely recover them.